Well, after a day of just hanging out at the pool we got bored and decided that we should go up Mt. Vesuvius. We hopped in the car after breakfast to drive there, which should have been easy breezy. Well, stupid GPS sends us through some shady neighborhoods in Naples, nothing too crazy, but of course the streets were narrow, drivers crazy, and I was traumatized by the experience in the narrow alley where we had the near-car-is-stuck-in-alley-experience. Somehow, we made it through traffic and up to Mt. Vesuvius. Even though our GPS insisted on continuing to go straight ahead, we had to stop at a parking lot just before the entrance to the protected nature reserve. 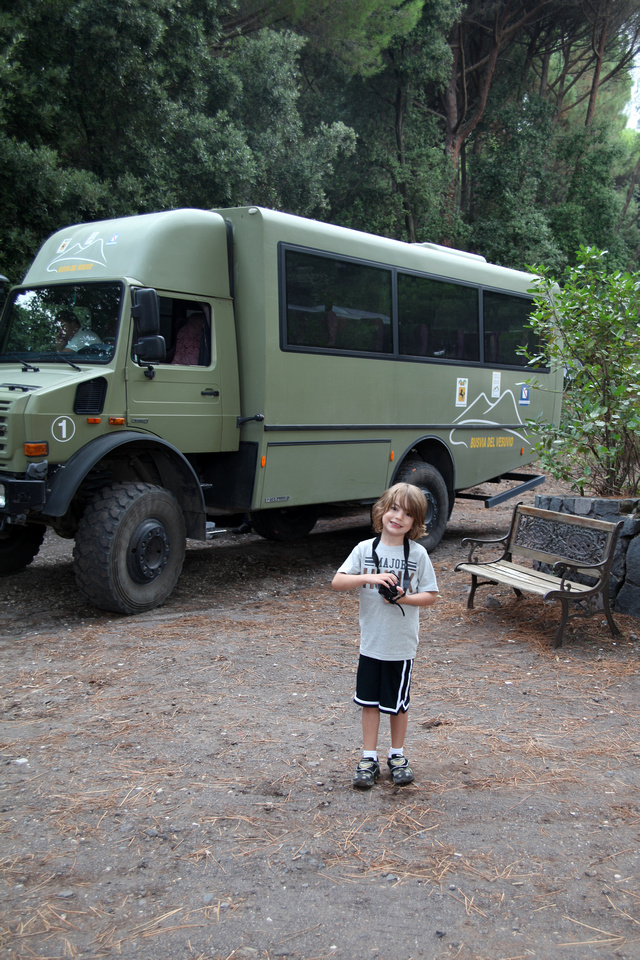 We had to pay a small fortune to hop on a big cool bus to be driven up to the volcano's crater. An older Italian guy got into a heated argument with the guys working there, from what I understood he was outraged by the high prices. It was highly entertaining, loud, lots of use of gestures, very Italian. In the end, the trip was well worth the money. Noah had a good old time on the bumpy ride!

We had to climb up the last few hundred meters to the craterwhere you can walk on the rim and look inside the volcano. A nice lady from Israel insisted on taking a picture of us, so here it is ;) 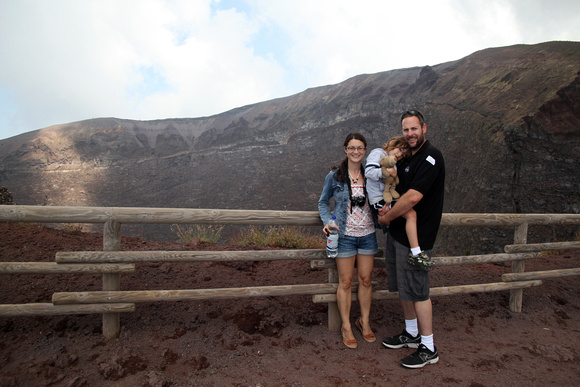 There are guides up there that tell you a lot about the history and the geology of Mt. Vesuvius, which was pretty neat. The volcano is dormant right now, so while it is pretty interesting to see, right now, it's not too spectacular. The last eruption occurred in 1944, before that, you couldn't look into the crater as it was covered by a hardened layer of lava that you could actually walk across. There also used to be a chair lift going up the volcano, which has been destroyed in the 1944 eruption, along with that lava layer. There is one little spot where you can see smoke coming out of the volcano, but other than that, it really is calm and quiet. The guide told us, though, that it is only a matter of time untill Mt. Vesuvius will erupt again, and since Naples and the surrounding towns and villages are getting bigger and bigger, and are among the most densely populated areas in Europe, the evacuation will be a nightmare. It was kind of hazy, so we couldn't see too far, but the view has to be amazing from up there on a clear day, when you can see Naples and the Sea from the top of Mt. Vesuvius.

Well, it wasn't too late in the day, so we decided that we should to a pit stop at Pompeii. Again, I have to mention how awesome my Noah is as a traveler, we walked around the ruins of Pompeii for about three hours, and Noah did great.

The size of Pompeii is impressive, as is its history. It was an ordinary town, its inhabitants underestimated the power of Mt. Vesuvius. I guess, small eruptions happened frequently, so the people just didn't take them too seriously. Once they realized how severe the eruption was, it was too late to escape. What I thought was so strange about Pompeii is how very well preserved some the walls in the houses and the paintings on them were, but how little effort is taken to actually protect them from the masses of tourists walking through Pompeii every day. 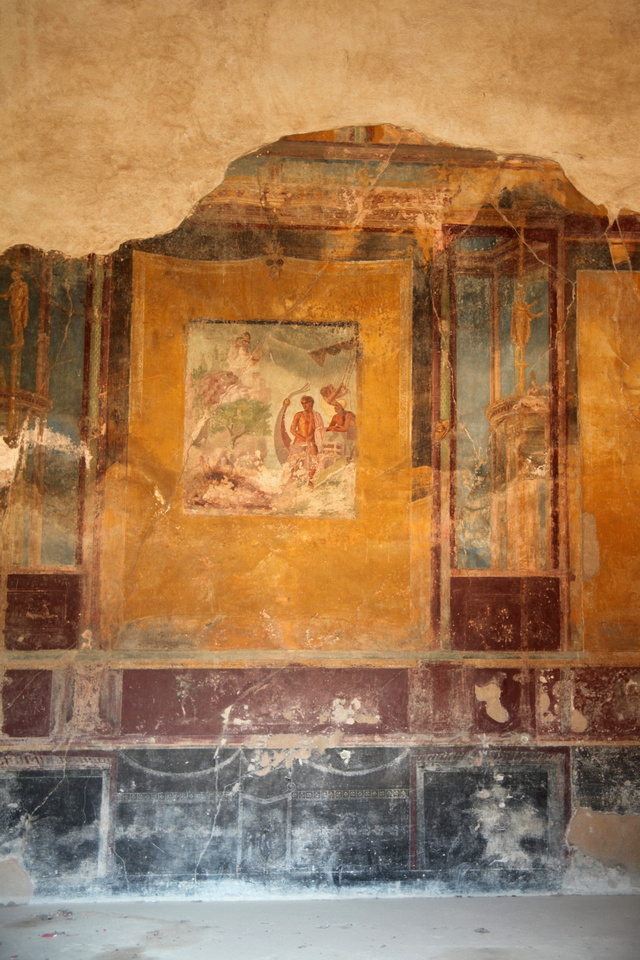 Some of the best preserved paintings are sperated by little ropes from visitors, but to others, you can walk up to and touch. There are no employees or volunteers like in other museums that kind of watch over these relicts. I guess, the size of Pompeii makes it impossible to maintain it. A lot of items have been brought to a museum in Naples, however. Much of Pompeii is yet to be discovered, and from what I understand, they are trying to make it a more holistic kind of archeological site, where things stay where they were found but are to be protected better.

We ended our day trying to get back to Sorrento. Traffic was crazy, the scooters passed us like swarms of bees, but you know what, I'm writing this from my boring German home, and I miss Italy. Traffic looks like a big chaos, but actually, it is pretty organized, and people are very corteous. You just have to be brave and use your gas pedal, watch out a little, and people will let you merge in.