We liked Provence so much, we went twice.

I've always wanted to see the lavender fields in Provence in full bloom. When Bob decided that he wanted to have lasik surgery done on his eyes in Landstuhl, I had a lightbulb moment: It's end of July, we are close to the French border, we should go to Provence. It's right there, just a ten hour drive from Landstuhl. That is nothing to the Reed family; to us, this means it's right around the corner! The first year we went, we unfortunately were about a week or two too late to see lavender fields in bloom. Most of the fields had been harvested already. Nevertheless, it was a wonderful trip; we saw so much in less than a week, beautiful landscapes, picturesque villages, impressive medieval towns, and even the Sea. 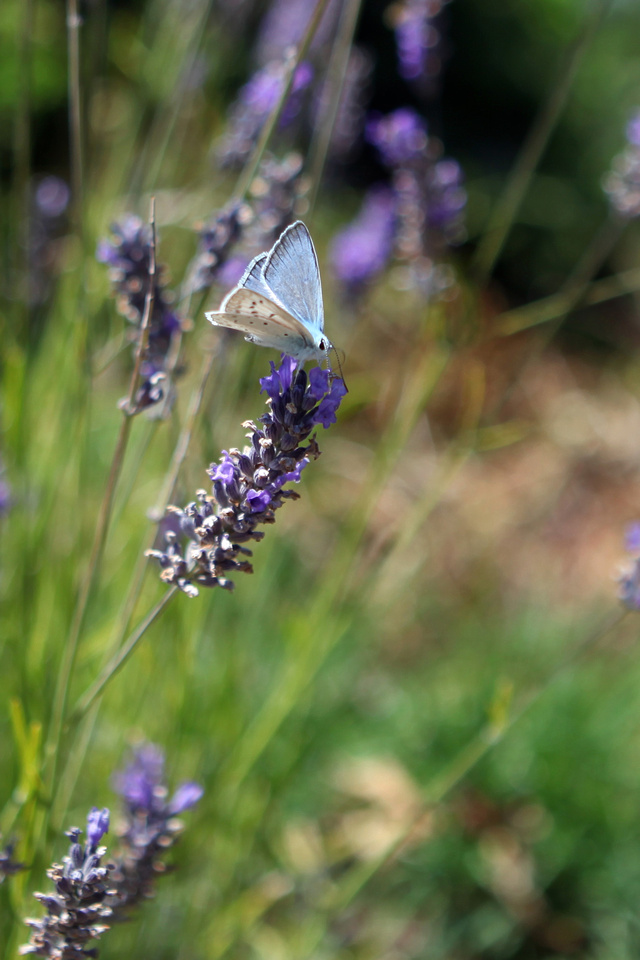 Day 1:The drive and our wonderful little hotel

The first day of our little trip began with a doctor's appointment to check Bob's freshly operated on eyes. He was fine, so off we went on our little adventure. We made the drive in about 12 hours because we hit some traffic jams along the way, but it was nothing too crazy. The tolls kind of surprised us at first, but then again, we are spoiled in Germany with neither having to pay tolls on our autobahn nor having to buy a vignette. When we arrived, it was already dark. We stayed in the Hotel Mas de la Senancole (http://www.mas-de-la-senancole.com/uk/index.php) close to the picturesque hillside town of Gordes. I loved our little hotel, the staff was very friendly, and the area was quiet and peaceful. Our little room was wonderful, large enough for all of us (oh, did I mention, we had Jack with us. He was a five months old puppy at the time..), and a door that opened into the garden.

After a wonderful breakfast in the garden by the the pool of our little hotel, we drove through Gordes and arrived still early at the Abbey de Senanque. The abbey is a major tourist spot, so we made sure we'd get there before the crowds made it there. It is situated in a tranquil area and surrounded by a large lavender field. It really was the only one that was still kind of blooming. Well, it was pretty dried out already, but at least we got the idea of what a lavender field looks like. We just walked around the grounds of the abbey, I took some photos, we enjoyed the peace and quiet, and when we noticed more and more people arriving, we drove on. 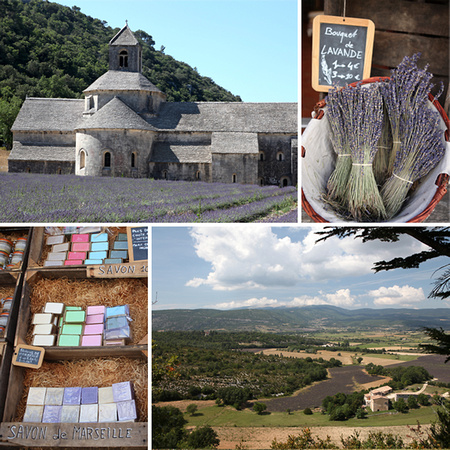 The rest of the day we spent driving around the Luberon in hope of finding more lavender fields. We really didn't have any luck with the exception of one field that didn't seem to be worked on anymore, but despite of that, the area is very pretty. We made it to Sault, checked out some stores and got something to eat in a little Bistro.

The afternoon we spent on the pool just relaxing and enjoying the warm sun of Provence.

After yet another nice breakfast we drove to Avignon. The papal city is fantastic. We had a kid and a dog along with us, but we still managed to see a lot of the sights, however, we could not go into the Papal Palace itself. Well, there is always next  time ;)....Since there was no way that the kid or the dog would walk the town with us, we decided to hop on a little train thingy. They didn't even care that we our puppy along. The train was great because it really gave us a good overview of the Avignon. It took us through the old town, but also through the gardens of the Papal Palace. We then moved on to the Pont St.-Benezet, the bridge that is the subject of the little song "Sur le Pont d'Avignon". Only about half of the bridge that used to cross the Rhone remains, and very often it gets very windy there. The breeze comes in from the Mediterranean Sea and we could definitely feel it that day. Poor Noah almost freaked out walking across the bridge, and to make matters worse, he let go of the little flyer he held in his little hand and it fell in the water. Noah pretty much lost it, but he was okay once we got off the bridge.

Well. We'd seen enough of Avignon, so we went on to the Pont du Gard, a Roman aqueduct which is remarkably well maintained. I highly recommend visiting there, not only do you get to see a structure that gives you an idea of the genius of Roman builders, but it is also a great location to spend a whole day there. Lots of families just hung out along the river that the Pont du Gard crosses, it is a slow moving shallow river lined by beaches of larger gravel stones, perfect for throwing rocks in the water, looking for fish, taking a swim, or letting the dog go crazy. We would have liked to stay longer, but oh well, the Reeds had to move on...so much to see on so little time... 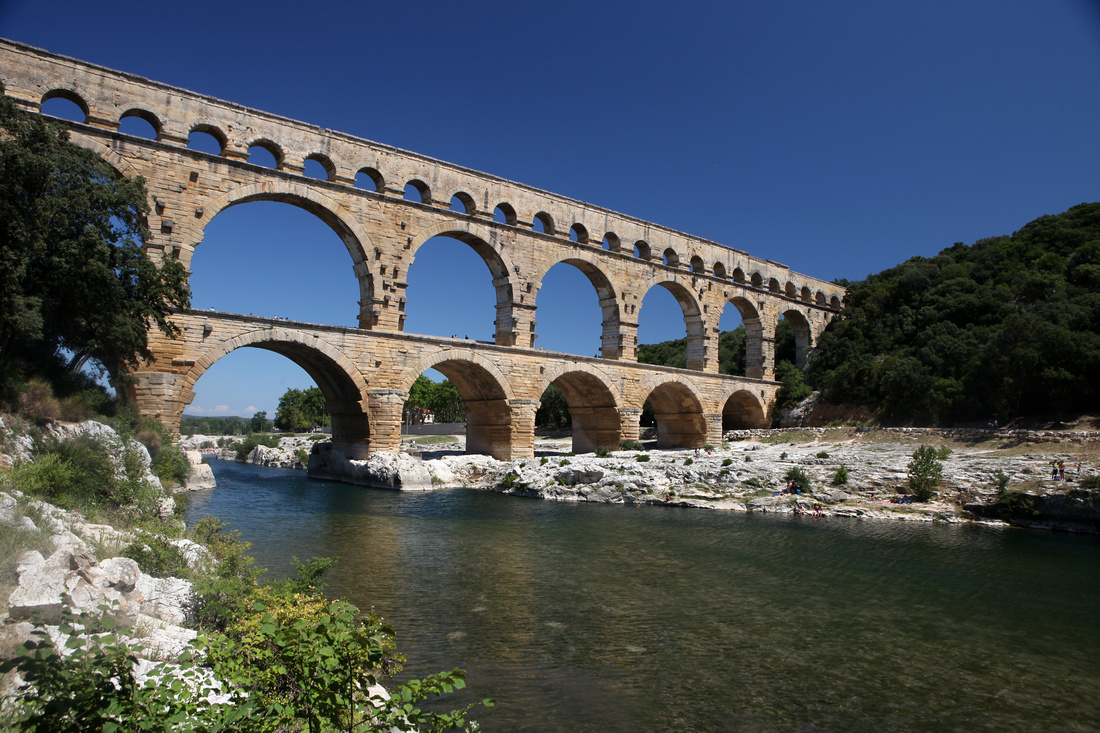 Our next destination on this busy day was the Camargue. On our way there, we got superlost, but it turned out to be a great leap of fate. We found Beaucaire and Tarascon. We only drove through the towns, but at that point, we already kind of knew that we would come back to Provence another time to see more. We drove through the Camargue, the flatland area between land and sea in the Rhone delta,  where you may see flamingos as well as beautiful white Camargue horses. We made it all the way to Saint-Maries-de-Mar on the Mediterranean Sea. It is a well known beach town, so of course we were there along with thousands of tourists...it was a Sunday night I think...It was still pretty, Noah got to play on the beach an got superfilthy dirty and covered in sand...a boy's dream come true.

We made it back to our hotel late at night. This was a superbusy yet fantastic day spent in a medieval town, looking at a fantastic Roman remnant of history, and on a warm sunny beach.

Well,  other travellers - especially those accompanied by a preschooler and a young dog - might have taken a break to relax. Not us. We made our way to Roussillion. The town sits on ochre cliffs which are spectacular. The little town itself is worth a trip with its narrow streets and the beautiful views, but you can also wander through former quarries. Awesome. Noah had fun climbing around, Jacks paws morphed into a deep ochre color, and I got to take a ton of photos. From Roussillion we moved on to the Vaclause area. I still had hopes to find a lavender field. This is what we discovered. 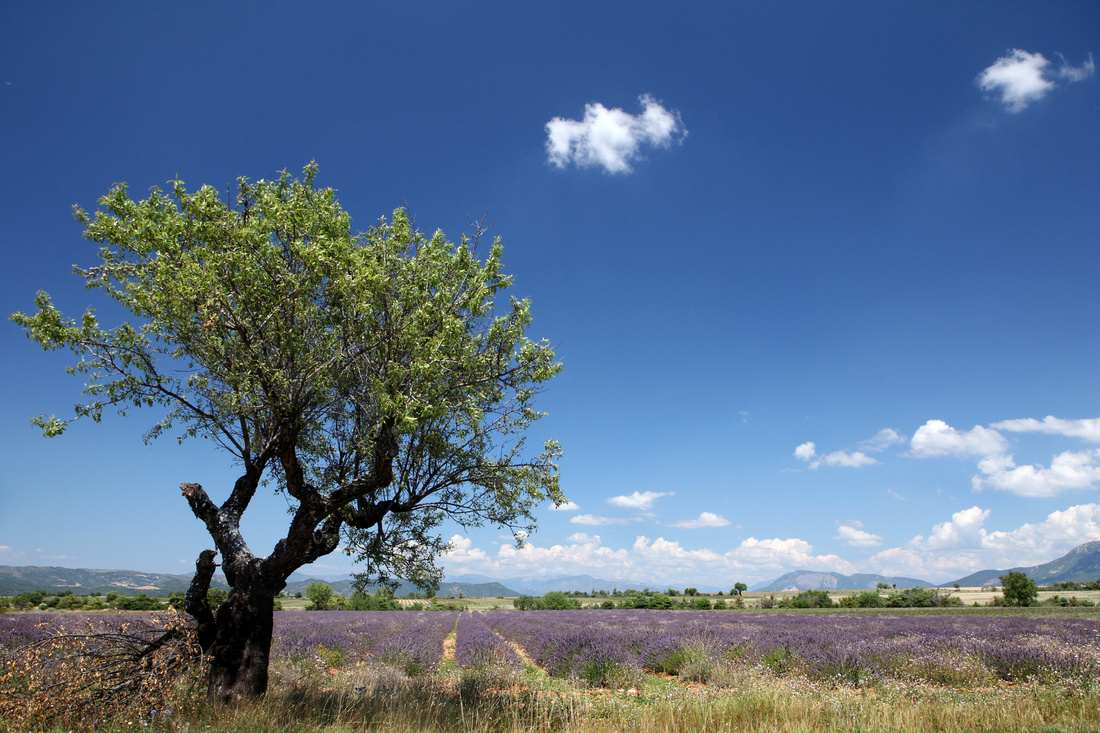 Somewhere between Puimoisson and St. Jurs

I was so happy, even though this might not be THE perfect field. Our drive led us through Cavaillon, Puimoisson, and ended in St.-Jurs. This little village might have been the favorite place we've found on this trip, so unexpected, so beautiful sitting on a mountain on the edge of the Alps. However, we agreed that Provence on a whole was a big surprise to us. We expected it to be kind of nice, of course, it is being hyped, but we thought, oh well, how great can it really be. To us, it really was and is one of the prettiest areas we've been to, and we appreciated the combination of different landscapes, medieval towns, picturesque villages, lavender, great food, and that provencal flair.

Well, St. Jurs was beautiful, peaceful, tranquil. I wasn't ready to go back to the hotel yet, so we drove to the Gorges du Verdon. Well, I had to drive, and I kind of chickened out, the road along the gorge is no joke. Bob would have braved it easily, but it was little too much for me to handle. I'm such a coward sometimes. We made a little past Moustiers-Sainte-Marie, and then went on home. This whole area would be a great destination for a week's vacation. You can hike, do all kinds of water sports, hang out in the small towns along the gorge, or use it as the hub to explore the lavender fields as well the Cote d'Azur. It's too bad, that there are only so many places we can really see and explore in a lifetime. Well, that and the fact that our wallets kind of put a limit on the vacations we can take...;)

Today, it was time to get back to Landstuhl in order to make it to Bob's checkup the next day. We hit the motorway, but we couldn't quite leave Southern France yet. We took a little detour where Bob and Noah checked out a crocodile farm while I hung out with Jack. They wouldn't let Jack inside, well, he would have made great crocodile food, I guess. From there we drove on to the Ardeche river. The drive was yet again gorgeous, we stopped in a wonderful little town overlooking the river. The Ardeche region is like the Gorges du Verdon, you could spend a week there and not run out of things to do. It is well known for kayaking and you can take short kayaking trips or spend a few days on the river. Well, it was time to go for good...

At the end of our trip, we were hooked on Provence. We decided pretty quickly that we would go back, I just HAD to see some lavender fields in full glory. Even though Provence has more than enough flair to make up for the lack of blooming lavender fields, in the end I've really wanted to see ;)